There are actually two stores that carry the Johnny’s Off License brand, the one I visited is the one near Campo de Fiore. I think the bottleshop near San Giovanni station is the original one but since I stayed in Trastevere this shop was easier for me to visit.

I already knew this store would be where I’d buy most of my ‘souvenirs’ but during my first Sunday in Rome I met a nice guy who just happened to be the owner of another bar in Rome. He told me to drop by in his bar any time I wanted and a few days later and enjoyed my time there.

He then did something very nice for me…he gave me a flyer, wrote his name on it and told me to show it at Johnny’s Off License to get a discount. He also called ahead to the store so the owner would know about this. Pretty awesome right? Not telling you who it was or which bar since not everyone is supposed to start trying to get this discount. Just be nice to people in Rome and who knows what happens!

When I finally got around to visiting this shop it was time to start thinking about which beer to take home…while enjoying a beer. Yes, you are allowed to drink on the premises! This narrow store has racks of beer on one side and fridges on the other with a little seating area where you can contemplate beer and perhaps life while drinking your purchase.

The owner is a cool guy who knows a lot about beer and has done some collaborations with Italian brewers. Of course I had to buy those, I had no choice! Where else am I going to get their own brews? He then offered to share another beer with him before I went to pack my souvenirs for my trip back home.

Good store, good experience, good beer, what’s not to like? 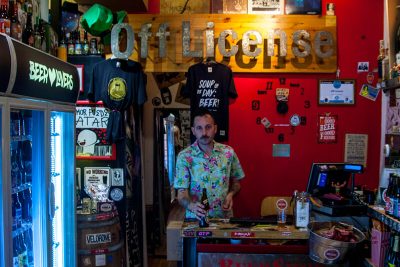