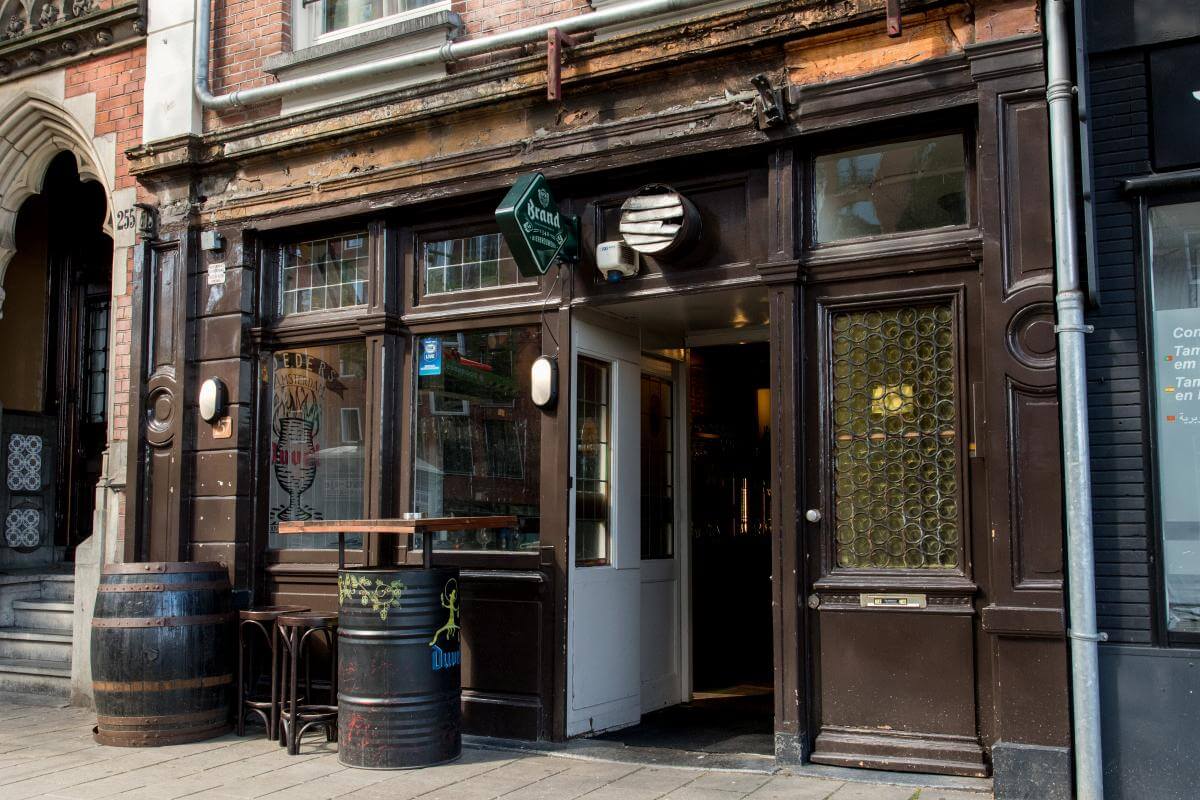 My first article on a bar in Amsterdam was a hard choice. There are quite a few craft beer places after all. After some consideration though I decided on one of the newer bars, one run by a jovial but opinionated Belgian with a love of people and beer. Beer isn’t the goal for Yuri Hegge though, beer is just a way for him to create a familial atmoshpere. This is Foeders.

Let’s start with the owner, Yuri Hegge. He was born in a bar, well, almost. He was born into a family in the bar business as his parents owned one in Achel, Belgium. They didn’t want him working in this life though.

He followed his parents wishes at first and studied to become a social worker, he wanted to help people. This despite him wanting his own beer ever since he was 15. In bars there’s a sence of family, of community in a bar that made him fell in love with it. Yuri wants to create a space where people can be happy and have a good time. A relaxed atmosphere is key. This is really his life’s motto in a sense.

In the end he did give in to his ‘urges’ and opened a bar in Lommel (still Belgium) at 26 years old. This pub’s called ‘Het Trefhuysch‘ and it still exists. Yuri isn’t in charge any more though, it’s now run by a former employee turned owner.

In 2014 he headed to Amsterdam to help set up a location of Delirium Café in the capitol of The Netherlands. He worked there for 8 months but he ended up leaving. The owners had a different vision for the place, one that didn’t quite fit in with Yuri’s view of hospitality.

He could have returned to Belgium at this point but he didn’t. He might not have had the job he expected but he did have the city he wanted. He fell in love with Amsterdam, its energy, its competitive nature. Why leave that? He wanted to remain part of it and open up a bar of his own, one he would be able to run the way he wants and create that ‘family atmosphere’.

Yuri’s way of hospitality (or perhaps the Belgian way?) hasn’t gone unnoticed back in Belgium either. It has led to Yuri receiving the ‘Gouden Lambikstoemper‘ as the first recipient outside of Belgium. He also has the honour of being named a knight in ‘The order of the Brewers’ paddle‘. Pretty awesome, right?

Not that far from the more touristic city center you find a neighbourhood called De Pijp and this is where Yuri found the perfect spot. A bar called Amstelvaart became available which also happened to be the oldest bar in De Pijp. For someone with a sence of history like Yuri it was the perfect spot.

He turned it into Foeders and opened up in January of 2017. In case you want to know where the name comes from, a foeder is a large wooden barrel that the Lambic breweries use in Belgium. Fitting if you look at the large collection of sours beers available.

I also want to mention the website or the url in particular. It’s sort of a location right? For the domain extension Yuri didn’t want the Dutch .nl domain. That would have been too weird for a Belgian. There was an alternative though, one that fit him way better since he loves Amsterdam so much, the .amsterdam domain. I applaud his reasoning for this choice.

Not much has changed from when it was still Amstelvaart. Sure, there are a lot more taps and the wall is basically used as a menu but otherwise most things are the same. That even applies to one of the bars most eyecatching features: the low bar. Back in the day (and I mean way back) this wasn’t a bar of course. It was a counter for the bar and a liquor store. People ordered and sat down at a table. It is a bar now though and I had to get used to it myself. When I got off my stool to use the facilities I expected the floor to be further down somehow. Silly huh?

The other main eye catchers are the fridges full of bottled beers, sour presents just waiting to be had by people that can appreciate them. That brings me to the beer.

When you talk with Yuri it becomes clear he’s a man with opinions, strong ones, especially if it’s beer related. I’m not saying that’s a bad thing, I actually like it when someone stands firm behind their ideals. These opinions as far as Foeders goes mainly apply to his choice of beers and how he wants people to feel in his bar. No breweries without their own installation here and only beer from people he knows.

Most of the beer flows from tap with 38 at the time I had my talk with Yuri. He plans to add 4 handpumps to make it 42. I did ask if he knows the Hitchiker’s Guide to the Galaxy but this reference was not intentional nor did he know the book. Still, I like that the answer to life, the universe and everything is represented in Foeders even if it’s unintentional. Beer is sort of the answer right?

These beers change almost daily but there are a few regulars. There’s always Amstel, Bolleke De Koninck, La Chouffe and Duvel available from draft. You can also often find beers from Uiltje and De Kromme Haring. To see the current taplist I suggest checking Untappd or just walk into Foeders. They’re all on the wall after all!

I already mentioned the the fridges, the magical, magical fridges. This is where all the sours are and there’s some really rare stuff in there. Something as exclusive like Bokkereyder is sometimes available and I’m not even talking about all the different Geuzes. If you like sours this is a little slice of heaven.

There are no beerflights available but you can order the draft beer in smaller amounts. Each serving is accompanied by a glass of cold water which I think is a nice touch. That way people stay hydrated and relatively sober for longer. There are special events though where some of the bottled beers are sold by the glass. Look at Facebook to see if there’s one coming up.

There isn’t a lot of food available to enjoy with your beer but there is a cheese platter available and of course the jars of peanuts everywhere. Crack them, eat them and just throw the shells on the floor. Yeah, it might be a bit messy but it’s how Yuri likes it. Who am I to argue? He also made a conscious choice to not sell any strong spirits. In Yuri’s opinion those often lead to trouble and he wants a safe place for people to work and for people to visit.

Foeders is now clearly on my list of places to visit in Amsterdam. With my birthday coming up soon I might even buy one of the rarer bottles to enjoy. Yuri will soon open up a restaurant and bar in the city center called Het Lagerhuys (you see the pun there right?) and I hope it will be as good as Foeders. Who knows? I could sit down with Yuri again but this time talk about that place for an article. 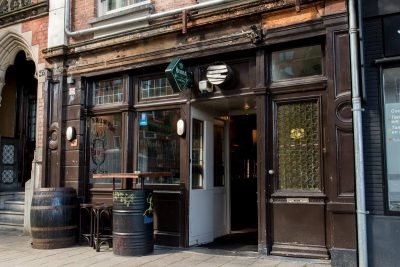 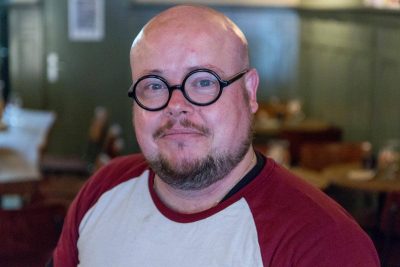 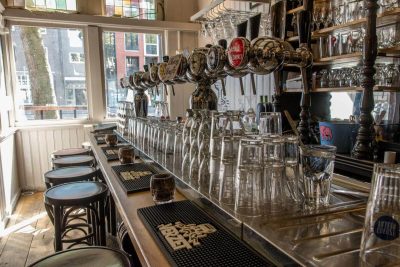 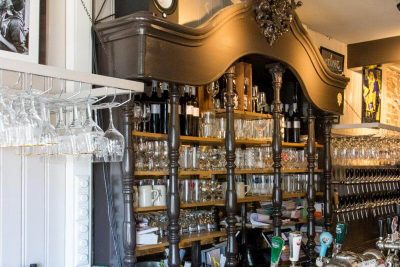 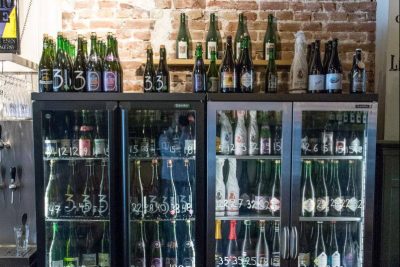 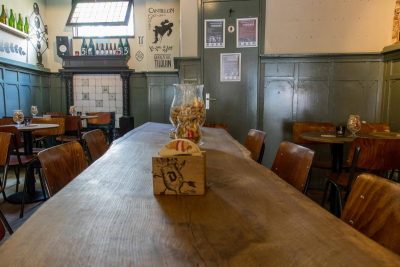 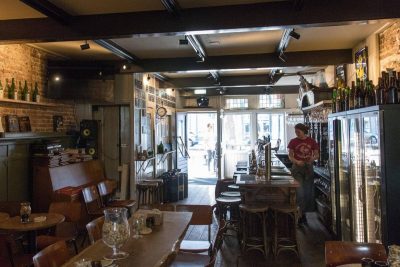 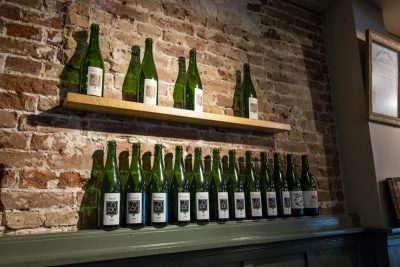 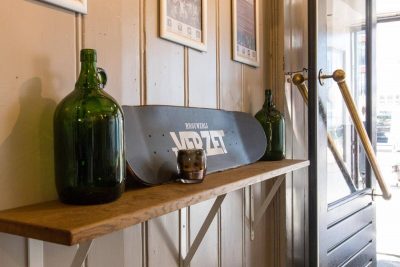 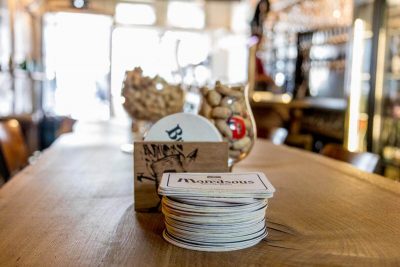 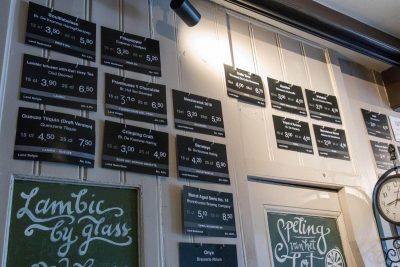